Friend Encounters is a weekly series featuring friends who have met celebrities.
I have written many times about Mad Man Pondo. There is nobody tougher, but nobody more humble and down-to-earth than Pondo. He's one of the few people who intimidated me about interviews before I met him, but he proved to be one of the coolest from our first meeting.
I can't say enough good words about Pondo. He was a leader in and out of the ring at Resistance Pro. He always had time for other wrestlers and even for me as I tried providing good coverage of RPro. I'm not worried about ruining his "Mad Man" persona, because once he steps in that ring, it is quite evident.
Pondo was a big recruiter for RPro, often bringing in new talented wrestlers from all over, onbe of which was Jewells Malone. Canada native Malone made her wrestling debut in 2011. She is a two-time PWE Flame champion. She also won the PWA Elite Women's championship.
Like Pondo, Malone's reputation preceded her. Fans were lined up to meet her at the RPro show. Some of the fans were lucky enough to get a 2fer picture of both Malone and Pondo. My pal Jim Strong was one of the lucky ones. I only wish the duo would have done more damage to Jim!
Go to EatSleepWrestle.com for info on Pondo's book Memoirs of a Mad Man. While you are there, check out John Cosper's other books, too! 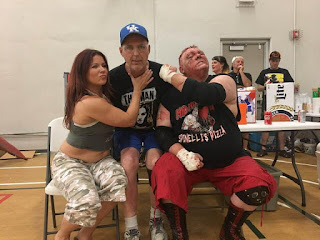 Jewells Malone, Jim Strong and Mad Man Pondo in Summit, IL-July 2019.
Posted by Johngy at 6:00 AM