On the Beat With Dan Pastorini-Part 1

A couple weeks ago, Scott, Matt and I went to see the Houston Texans play the Atlanta Falcons.  Once in Reliant Stadium, Matt noticed a book-signing.  As we walked to it, I was ecstatic to see Dan Pastorini signing copies of his book, Taking Flak.
I was a huge fan of his as I was growing up.  The Houston Oilers picked Dante with their first pick in the 1971 NFL draft (3rd overall behind Jim Plunkett and Archie Manning).  For the next nine years, Pastorini quarterbacked the Oilers, helping turn the team from a doormat to a legitimate Super Bowl contender.
His toughness on the field was undeniable as he either played through injuries or rushed back from them.  He even wore the first flak jacket to protect his battered and broken ribs.  Oh and he also punted for several seasons.
It was quite a thrill meeting Pastorini.  He took the time with each of us to actually make it special.  He looked everyone in the eye as he talked to them.  It was a nice experience.
I read Taking Flak on the flight home and totally enjoyed it.  Pastorini was open and honest about his life on and off the field.  He doesn't tell a lot of inside stories of others, but he reveals all about himself.  There was a story about a talk with his dad that almost brought me to tears.
When I got home, I contacted Pastorini and asked him a few questions which he graciously answered.  Below is the first part of the Q&A.

Q-You are an Oilers legend, yet that team is now in Tennessee and the Texans are in Houston. Do you have an allegiance to either of these teams?
DP-I feel more allegiance to the Texans because they are Houston's Team. The Titans left town and changed their name which leaves the Oiler mystique as somewhat of an anomaly. We are more cult heroes than actual legacy of one team like you see with teams such as the Packers or Bears. I'm loyal to the city of Houston as this is where Luv Ya Blue remains.

Q-Would you name 2-3 players from your Oilers who you feel are unheralded or underrated?
DP-Robert Brazile, Curley Culp, Billy Johnson. These 3 men deserve to be in the HOF, but because of the above mentioned detachment from a legacy team, they are not represented and forgotten. Robert was the prototypical OLB. Without his recognition, there would have been no Lawrence Taylors. Curley was the consummate Nose Guard for the 3-4 defense. It was built for him. Billy, well you tell me if there has ever been a more exciting man in punt and kick off returns other than Devon Hester. Billy was the first! My whole Luv Ya Blue teammates were very special.

I will post the second part of this Q&A tomorrow.  Until then, check out DPQualityFoods.com to learn a bit more about Pastorini and his Texas-style rub products.  Also, check out Taking-Flak.com to learn more about his interesting book. 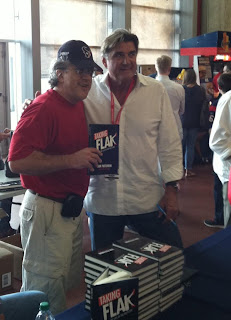