As most regular readers know, I have a fascination with virtual card creations for "cards that never were".  I have saluted such blogger/card creators as Cards That Never Were (at White Sox Cards), Chachi Cards (at The Phillies Room), random card creations and corrections (at Wrigley Wax), Final Tribute cards (at Garvey, Cey, Russell and Lopes) and random stuff (at Punk Rock Paint).  There is even a site called Cards That Never Were which focuses mostly on just that.
I have my regular series of Celebrity Jersey Cards, but they are mostly just silly.  Outside of that, I have occasionally done cards that never were and today is one of those occasions.
Earlier this week, I featured former major league pitcher Rich Nye in a Friendly Encounter with my bud Scott Beatty.  Nye appeared on Topps baseball cards from 1967 through 1970. Nye pitched for St. Louis and Montreal in 1970.  His '70 card lists him with the Cardinals, but it is one of those capless anonymous shots Topps often used when a player was traded.  I always hated those cards and decided to give him a real Cardinals card. 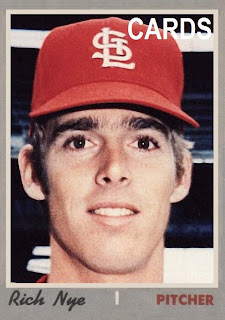 Nye did not have a card in 1971, which isn't shocking considering he pitched in only 14 games in 1970.  Still, I felt the need to give him a 1971 card, which would also be his final major league stats card (or tribute card, as some call it).

Great job with both!