When we last saw Josh Kohl, he was meeting Dee Gordon, star shortstop of the Los Angeles Dodgers and son of former star pitcher Tom "Flash" Gordon.  Today, I am featuring Josh with Tony Gwynn Jr., another second generation player with the Dodgers.
Josh is the creative genius behind DodgerBobble.com, a great site "dedicated to the Los Angeles Dodgers, Bobbleheads and Baseball".  Josh attends many autograph signings and has some great stories and pictures.  You don't have to be a fan of the Dodgers to like this site.  I know I check it regularly and I am not a big Dodgers fan (sorry Josh).
One of the appearances Josh attended was about a year ago and featured Tony Gwynn Jr.  You can read Josh's full account and get more pictures here.
Tony Jr. is carving out a decent career after a bit of a rough start.  It can't be easy following in Tony Gwynn's footsteps.  Tony Jr. has already passed his uncle Chris Gwynn in hits and at only 29, he can still put together a very nice career.
Thanks to Josh as always for sharing his great stories.  Thanks to him for putting out a great site, too! 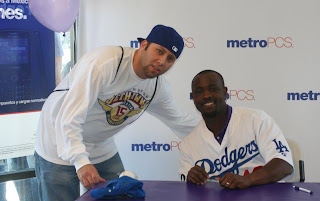 Thanks Johngy. I'm going to a Tony Gwynn Sr appearance this weekend.

Thank you for letting me run the pictures. We don't get a lot of LA player appearances out here.
Thanks, too, for a great site. Lots of entertainment there.