Back with David Della Rocco at Wizard World 2012

We first met David Della Rocco at the Motor City Comic Con last May.  One of the stars of The Boondock Saints, he was quite popular at the convention, yet we still scored an interview with him.
When the interview ran on Johngy's Beat, the page views exploded.  I don't remember the exact number, but it was almost double the previous high amount.  Additionally, I posted the David Della Rocco interview on YouTube and it also exploded with about 400 views on the first day.
I knew he was popular, but even I did not expect that type of response.  I will gladly take those views though!
I could not get an interview with him at Wizard World, but I made sure to approach him and tell him about the interest that interview garnered.  He remembered me from MCCC and was pleased that the interview did so well. 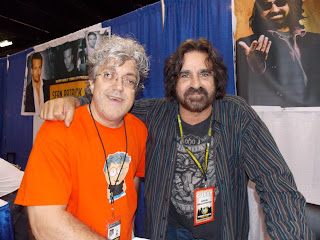 David Della Rocco and me iat Wizard World in Rosemont, IL-August 2012.
Posted by Johngy at 5:55 AM