Christopher Lawson is the creative force behind CrackinWax.wordpress.com, a cool site about baseball cards, the Minnesota Twins and other fun stuff, like getting in shape, losing weight and running a charity 5K.  Recently, Christopher, who has been losing weight) completed a charity 5K and met Glen Perkins of the Minnesota Twins.  You can read Christopher's account of it here.  Christopher meeting Glen is a cool Friendly Encounter, especially considering the rest of the story, but today's feature will segue into something else cool that Christopher is doing.

Panini is teaming with Crackin' Wax for a huge edition of BoBuBingo. Panini is donating 1 box of 2012 Rookies & Stars Football and 1 box of 2012 Cooperstown Collection and an AWESOME special BoBuBingo Redemption for the grand prize! Perhaps most important, this is a charity event with the money going to the American Red Cross*!  Each BoBuBingo card is only $5 (and remember...that goes to charity) and you can get as many as you want.
Game 1 is Wednesday September 26 at 7 pm CST.  Game 2 is Wednesday October 24 at 7 pm CST.  Don't wait for Game 2 though.  Play Game 1.  Well, actually, play both!!!
All of the info and rules can be found on Crackin' Wax at Panini Charity Double BoBuBingo.  This is a great chance to get some cool cards and to help a great cause. 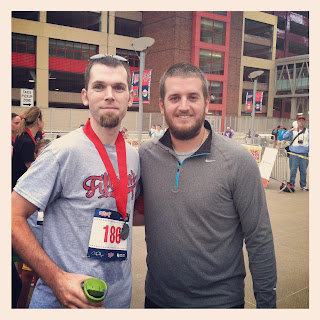 Christopher Lawson and Glen Perkins in Minneapolis, MN-August 2012.
Posted by Johngy at 5:55 AM