This is it.  The Bears versus the Green Bay Packers is the greatest rivalry in all of sports and that rivalry is renewed as the Bears venture north to Green Bay.
The Bears are 8-5 and the Packers are 9-4, but (not to be too cliche) those records mean little when these rivals play.  With Aaron Rodgers ascending to the elite level and Jay Cutler ready to follow him (now that he has some offensive help), this game promises to recall some of their great battles of the past.
Despite the offensive potential listed above, I am concentrating on defense today.  Steve McMichael played thirteen excellent seasons in Chicago and one last season in Green Bay (although he sometimes likes to deny that fact).  Mongo might have played in Green Bay, but he was never really a "Packer."  Let's be honest.  Despite starting his career in New England and ending it in GB, Mongo will always be a Bear.
He certainly was a Bear on defense.  Hampton and Singletary are Hall-of-Famers and deservedly so, but a case could be made for McMichael's enshrinement.  McMichael was a feared defender.  While playing defensive tackle, McMichael had two interceptions and three safeties during his career.
Hopefully, the spirit of Mongo will be present on the Bears defense today.  As the old saying goes, the best offense is a good defense.  You didn't get much better than McMichael. 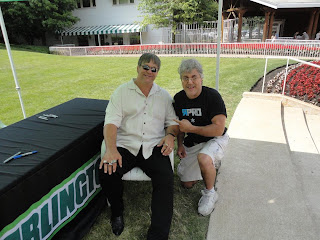 Steve McMichael and me in Arlington Heights, IL-July 2012.
Posted by Johngy at 5:55 AM