This is a weekly series which attempts to combine my lifelong passion for bubblegum cards with my interest in celebrities.

O'Shea Jackson was born in Los Angeles (CA).  He embarked on a musical career from an early age.  You probably know him better as Ice Cube.  He has come a long way in his life, but he has not strayed too far from his SoCal roots.  He is wearing #18 for Randy Moss (my guess) and he gets extra points for having Jim Plunkett on his Celebrity Jersey Card! 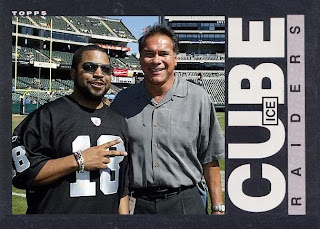 Robert Ritchie was born near Detroit (MI) and like Ice Cube, he has come a long way since then.  Better known as Kid Rock, you would have thought he would be seen in a Lions jersey for his first Celebrity Jersey Card.  I am sure he is just playing to the crowd.  At least Nashville has great musical significance.  Anyway, this kid rocks a #2 Rob Bironas jersey! 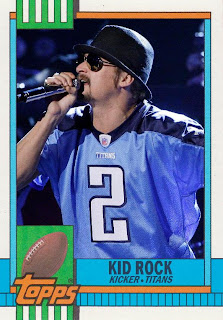