I am not so self-absorbed that I would actually think Traci Lords is my friend.  The facts are that I have met Traci many times over the last 15 years or so.  She knows me and sometimes remembers my name.  Considering the amount of people celebrities meet at these conventions, I am always a bit surprised when celebrities remember any of us.
At Days of the Dead in Indianapolis (IN) last summer, I was walking to the event when I saw Traci approaching from the opposite direction.  Traci actually semi-stopped me to greet me, although she admitted not remembering my name.  I thought this was a very nice gesture on her part.
I continued on and met my friend, Todd Card, author of Hell Cometh.  I interviewed Todd again and we caught up a little with each other.  Then I let him get back to his fans and I went to get more interviews.  I checked back with Todd a few more times over the weekend.
At some point, Traci also checked in with Todd.  In fact, they had quite a meeting and it moved Todd, who walked away with a whole new appreciation for Traci.  I learned of this meeting through following Todd on Facebook.
Todd wrote about meeting Traci and included a couple pictures and a short video.  Todd's take was uniquely Todd.  I think Todd gained a new friend in Traci.  How cool is all of that?
Todd is an extraordinary person.  I am so proud to call him a friend.  I have learned so much from him and am lucky to know him.  It started out as me trying to get an interview with a new author and it continues with me gaining a great man of a friend.  How cool is all of that?
Todd's debut novel, Hell Cometh, was my first foray into the zombie genre.  I admit, it startled me a bit (okay, it scared the living crap out of me at times).  The book is such a piece of Todd.  He holds nothing back.  Please, do yourself a favor and check out HellCometh.com to learn more about this terrifying book.
I view this as one of my most interesting Friendly Encounters.  Traci Lords and Todd Card.  Two very interesting people...one cool encounter! 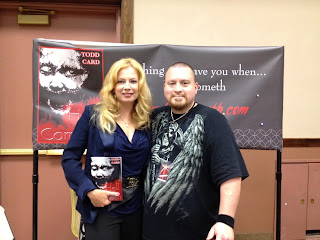 Traci Lords and Todd Card in Indianapolis, IN-July 2012.
Posted by Johngy at 5:55 AM