Jordan Ladd's Mom was an Angel

I was 12 when Cheryl Ladd joined the cast of Charlie's Angels.  Like most boys my age, I loved the story content, plot development and the educational value of the show.
I liked Cheryl from the moment she appeared.  I had seen her in other episodic television shows, but seeing her every week on Charlie's Angels gave me a whole new perspective.  I was becoming a big fan of her body of work.
Information on celebrities was not as available back then as it is now.  I could not look for Cheryl on imdb.com and learn that she had a baby girl named Jordan in 1975, two years before she became a weekly staple of my television watching.  I also could not learn that the little girl seen in Kris Munroe's flashbacks in a 1978 episode was Jordan (aged 3).
Jordan did not do any major acting after her debut until about 12 years later and she has been working steadily since then.  Her biggest role was probably as a teenager who tortures Drew Barrymore in Never Been Kissed.
Despite the fact that I felt very old, I had to meet Jordan at the recent Days of the Dead convention.  Jordan is beautiful.  She definitely looks like her mother.  She was also very nice.  We talked for a few minutes and I almost got an interview.  The timing just wasn't good.
That's okay.  I hope to see Jordan again at future conventions.  Maybe I'll even meet her mom and her together at some point.  Dare I dream? 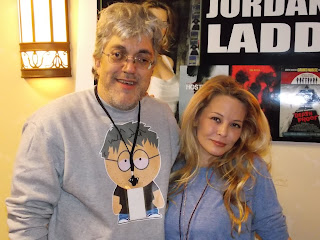 I'm sure you will see the two of them together soon! Can't wait to see that pic!