It's dreary and my mind wanders to sunny times and baseball.  Few things represent those two things better than the Los Angeles Dodgers.  Few thing represent the Los Angeles Dodgers better than a great site called DodgerBobble, run by Joshua Kohl.
I have featured Josh here many times already.  As the site name would indicate, there are a lot of bobbles to be found on DodgerBobble, but there is much more.  There are Dodgers baseball cards and Dodgers player appearances.  There is also a lot of other cool stuff, not necessarily related to the Los Angeles Dodgers.
Such is the case with a player appearance Josh and his buddy Tom attended.  They met basketball Hall of Famer Jerry West.  West is one of the first names I remember from my youth.  He is also rumored to be the man depicted dribbling in the silhouette NBA logo.  This is one cool Friendly Encounter, but I encourage you to read the whole story on his site at Player Appearance: Jerry West.
I always appreciate Josh's willingness to share his pictures.  He gets a lot of west coasters, who I would never get.  I also look forward to his continual coverage of all things bobble.
For a fun time, check out all of Josh's stuff at DodgerBobble.com. 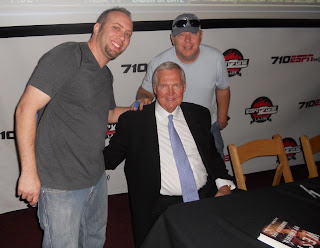