This is a regular series which features my friends meeting celebrities.

Melanie Cruise was the first champion in Resistance Pro Wrestling.  Melanie was the first R Pro Women's champ and, except for a brief period when the belt was held up, she has held the title ever since winning it.
Melanie is a great wrestler and a tremendous asset to R Pro.  Melanie has been ranked in the PWI (Pro Wrestling Illustrated) top 50 female wrestlers.  I have seen her work as heel or face and she is excellent in either role.  At R Pro, she started as a heel and I believe was turned good because the crowd was so behind her.
We have interviewed Mel several times and have talked to her many other times just as friends.  Like several other members of the R Pro family, I count Mel as a friend.  Can you tell that I just think she is awesome.
Matt has obviously met Mel many times.  One of the most fun occasions was hanging with her and the R Pro gang at the party for their WCIU tv debut.  It was cool just to enjoy the evening with everyone there with no actual wrestling.  Matt did take the opportunity to pose with Mel and her Women's title.
Mel will be taking on Awesome Kong at R Pro's next event on January 18.  They will be returning to 115 Bourbon Street (the site of the party and this Friendly Encounter).  Matt Hardy will also be there.  This promises to be another outstanding R Pro show.  For more info on Melanie Cruise or R Pro, go to ResistancePro.com. 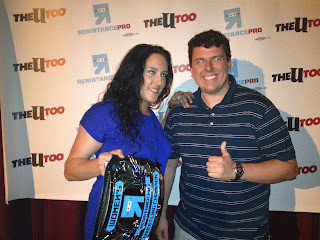 Melanie Cruise and Matt Parker in Merrionette Park, IL-Summer 2012.
Posted by Johngy at 6:00 AM