I first met Rob Myers at a POWW (Purely Obsessed Wrestling World) event early this year.  Rob is the Chief Photographer for POWW (and other organizations, as I would learn).
Rob was really nice to us from the beginning.  While others might have gotten territorial when I took pictures for my coverage, Rob actually helped me, sometimes even calling some shots for me.  He also let us use some of his pictures in our coverage.
I have heard though, that Rob has a bit of an evil side (actually, I think I heard it from Rob).  Aside from a sometimes wicked sense of humor, I have not seen Rob be anything but nice to everyone.
Over the months, I learned that Rob does photography for several wrestling companies as well as photographing many models.  I have often offered my assistance with the model photography, but for some reason, Rob has not accepted my offer yet.
Rob is not a celebrity (although he does have an odd cult following), but he deserves a spot here on Johngy's Beat.  Not only has he been a help to us in our wrestling coverage, he has become a friend.  Who else would put up with my clumsy attempts to get a good in-ring action shot?  Who else would take the occasional picture where my big head (both real and emblazoned on my shirt) is clearly visible in the background?
Now with the year coming to an end, I think it is the perfect time to highlight Rob for all of his help, for his friendship and for his photographs with me in the background which allow me to shamelessly plug JohngysBeat.com.  Check out Rob's excellent photographic work on the Rob Myers Photography page on Facebook. 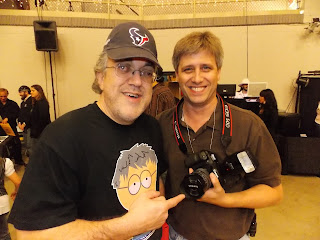 I resemble that remark!!!!

The only thing EVIL about Rob, is the fact that he too is a member @ the Castle owned by your's truly....
the REAL "EVIL" one!!

EZ!!! Luv ya buddy!! This summer, I know a place where you can get some AWESOME carrot cake!!

You guys know each other? ohhhh worlds colliding...

Rob is one of the nicest guys I've never met!