Howard Hesseman has had a long and successful career, but he is best known for his role as Dr. Johnny Fever in tv's WKRP in Cincinnati.  I also liked him in many other roles, such as on Head of the Class, One Day at a Time and even Soap.
I was excited about meeting Hesseman at the Motor City Comic Con, but I have to say I walked away a bit disappointed.  First, I state very clearly that Hesseman was polite and did nothing negative at all.
My disappointment was that Hesseman was not very interactive.  I have seen this before (Dean Stockwell).  Some convention celebrity guests just are not very engaging.  It's not that they are bad guests (Adam West), it's just that they seemed reserved.
There could be several reasons for their behavior.  Maybe I am not engaging enough myself to pull them into a good conversation.  Maybe they are new to the convention scene and they just haven't warmed up to it all yet.  Maybe they were just having a bad day for whatever reason.
I didn't walk away angrily after meeting Hesseman.  I just walked away sort of empty.  When you meet a childhood favorite, you always want one little moment of bonding.  Usually that happens at some point in the process.  Sometimes, the magic just doesn't happen.  Oh well.  Maybe the next time I meet Hesseman will be better. 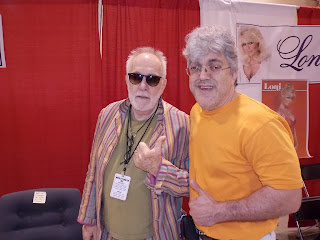 Sorry that it wasn't a great experience. I remember him from The Bob Newhart Show. Looking at this IMDB listing I learned that he was in a couple of episodes of The Andy Griffith Show.

"Hot Dog Vendor" in the TAGS episode "Goober Goes To The Auto Show." He even uses an alias!

For Christmas I received a DVD set of Family Feud episodes featuring celebrities. He seemed the same way you described on there three decades ago.