As I have written many times, I enjoy taking pictures with convention attendees who are dressed in character.  Last year on wrap-up day at Wizard World, I ran into Batman and Batgirl (where was Robin?).
I wasn't really impressed with Batman.  Despite having a molded front torso, the Caped Crusader still seemed to have a nice paunch pushing forward.  As for Batgirl, what is not to like about a young, attractive woman dressed in purple leather?
I think Batgirl was ready to dump Batman.  She was digging my Aquaman apparel.  Aquaman beats Batman anytime. 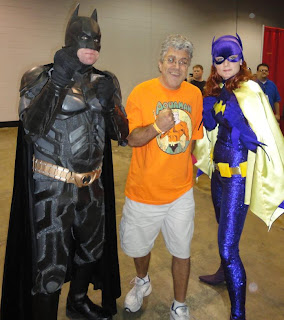