This is a regular series, in which I attempt to combine my lifelong passion for sports cards with my interest in celebrities.  Since hockey will be back soon, I am featuring two Bears in Hawks jerseys to celebrate the return of hockey.  Hey, they weren't doing anything anyway, since they didn't even make the playoffs!

Kellen Davis is a native of Michigan, but his years with the Bears lead him to the Hawks jersey.  I wonder if there is a picture of him wearing a Red Wings sweater?  Anyway, despite the critics, Davis has had a pretty good career for a 7th round draft pick.  He will never be a Hall of Famer, but if the Bears offense ever gets help, Davis could be a solid second tight end.  The #87 on his Celebrity Jersey Card matches his Bears number.  I don't believe there has ever been an #87 on the Hawks. 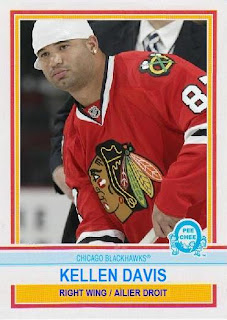 Matt Forte has been a steady force on the Bears offense.  Despite hitting his usual stats, 2012 seemed to be a bit of a down year for Forte.  With a new Bears coach and a push for a better offense, I am expecting a big season for Forte.  The #22 he is wearing on his Celebrity Jersey Card is obviously his Bears number and not an homage to Grant Mulvey (a very good player of my youth). 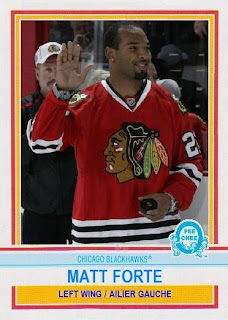