This is a regular feature which attempts to combine my lifelong passion for trading cards with my interest in celebrities.  The NFL playoffs are not going the way I want.  Today Ione Celebrity Card makes me sad and the other one is there to help me get over the pain.

Booker T Huffman is a mostly retired pro wrestler.  Booker overcame a rough childhood to become a Hall of Fame-bound wrestler.  He is a multi-time Heavyweight champ and he won even more tag titles.  The native of Houston showed his Houston love in his Matt Schaub #5 jersey, which also goes nicely with one of his tag lines (5 time, 5 time, 5 time, 5 time, 5 time World champ).  This Celebrity Jersey Card picture was found by Matt Parker and thus is dedicated to Matt and his father, two of the biggest Texans fans. 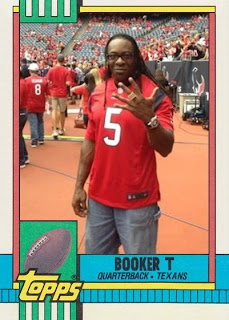 What better way is there to beat my playoff blues than by bringing a little bliss, as in former Chicago Bliss quarterback and former pro wrestler Christy Hemme.  The Bliss are part of the Legends Football League, which was formerly the Lingerie Football League.  I am not sure what number Hemme wore, but it should have been 10.  Who would have picked Hemme to be the first football player to do the Heisman pose on a Celebrity Jersey Card?  Aside from her outer beauty, I really like Hemme, as readers of my blog should know.  She has always been great to JohngysBeat.com and once again, she perked up our spirits! 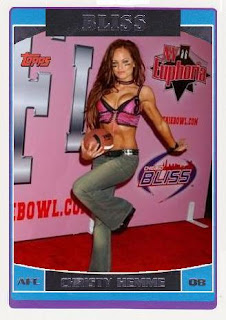