Mark Metcalf has had a long career, but is probably best known for roles in three major franchises.  He played Neidermayer in Animal House, the Maestro on Seinfeld and the Master on Buffy, among many other roles.  Aside from the great impact on his career, those roles make him a triple threat for celebrity autograph conventions.
As I have written before, collectors of any given franchise like to get everyone involved.  Just being in one can make the actor a major favorite at such conventions.  Being in three very successful franchises is like a golden ticket at such conventions.
Adding to all of that, Metcalf is extremely personable.  He will sit and talk to everyone for as much as time permits.  He also has a nice assortment of pictures you can get signed.
I am not necessarily a Seinfeld collector, although I am a big fan of the show.  Still, I have met the Maestro, David Puddy, the Soup Nazi and Mike Moffit.  Happily, they were all pleasurable experiences. 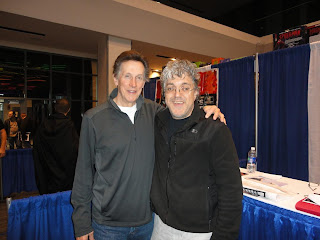