Today is Valentine's Day.  Therefore, I am giving everyone a hart...a Bret Hart
Hart comes from a wrestling family.  His father Stu ran Stampede Wrestling for a long time.  Many of his brothers and brothers-in-law were also wrestlers.  The family experienced a lot of success, but unfortunately a lot of sadness, too.
Bret was an outstanding amateur wrestler who found his first major success in the WWE.  He won the tagteam championship twice with his brother-in-law Jim Neidhart, before he went on to a Hall of Fame career as a singles wrestler.
Bret was the victim of an unexpected, unplanned and unfair loss in 1997.  This caused a huge rift between him and WWE owner Vince McMahon.  Bret left the WWE for the rival WCW, but was never used properly there and never quite regained the heights of stardom.
In 1999, Bret's brother Owen died in a tragic fall right before a match.  Obviously, this was the greatest tragedy the Hart family endured.
In 2002, he suffered a stroke after hitting his head while falling off his bicycle.  Many months of rehab followed and Bret's active wrestling career pretty much came to an end.
Matt and I met Bret recently at a PCW event in Oak Lawn (IL).  PCW is a local wrestling organization which goes all out to entertain the fans with their in-ring action and by bringing in great guests like Bret.
Bret was rather quiet, but very nice to everyone.  He made sure to make eye contact, shake your hand and ask for your name.  He also thanked everyone individually for coming out.
Bret hasn't made a lot of personal appearances and his fans were excited about this opportunity.  He made sure to give everyone what they wanted.  He was a class act and he seemed genuinely appreciative to the fans. 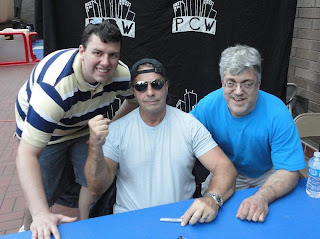