Pam Grier is credited as being the first African-American female to play the lead role in an action film.  The movie was Coffy and Grier was praised for her work in it.  Grier went on to carve out a career in blaxploitation films of that era.  After that phase, Grier continued getting roles on television and the big screen.
I was excited to meet Grier at the Hollywood Celebrities Show.  She was very charming and very classy.  She was also one of the cool celebs who wanted her fans to double check their pictures to make sure they were happy with them.  That type of attitude should always be applauded.
Grier overcme a rough childhood to become a major star.  It was really great to see her have a big career revival in the mid-90's thanks to Jackie Brown.  A whole new generation was now seeing her.  I just hope those new fans know their history or do the research to learn Grier's entire interesting story. 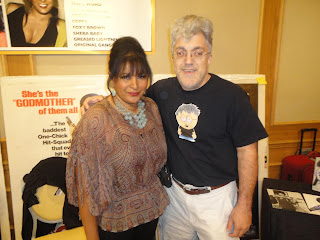