This is a recurring series which attempts to combine my lifelong passion for bubblegum cards with my interest in celebrities.  Today, I salute the Super Bowl participants.

Mikey Wild is one half of Threat Level Black, one of the funniest, most talented tag teams on the independent wrestling scene.  Together with CJ Idol, TLB has become major fan favorites in POWW Entertainment.  Mikey is a big 49ers fan.  He is not just wearing the jersey to get cheers from the crowd.  Actually, in Chicago, that might be the only thing that could get Mikey booed.  Next time I see him, I will ask if his #81 is for Garrett Celek.  I prefer to recall Russ Francis wearing it (but I am showing my age here)..  Either way, it makes for a great Celebrity Jersey Card. 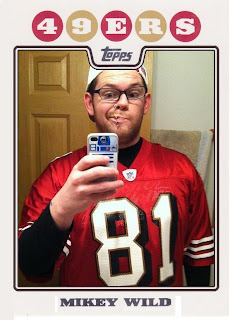 Michael Phelps won 22 Olympic medals, making him the most decorated Olympian of all time.  The native of Towson (MD) is a big supporter of Baltimore sports teams.  I see him more as a quarterback, but he wears the #12 for wide receiver Jacoby Jones for his Celebrity Jersey Card. 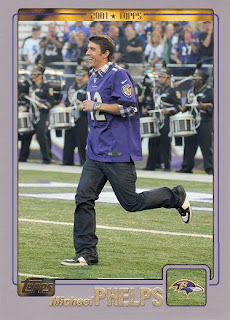