John Schenk is a very special person and I am proud to call him a friend, as are hundreds of others who he has helped.  Still a teen himself, John has been helping others for several years.  It all started for John way back when he was in the fifth grade.
John's sister had a kidney transplant and John decided to raise money to fight kidney disease.  His solution was to start an online business selling authentic autographed memorabilia.  The success of this venture lead John to expand to organizing autograph appearances, which were also successful.  By now, you can clearly see that John is not your average teen.
However, like the average teen, John also had his own problems.  He felt isolated.  He even tried to commit suicide during his high school years.  John's road to recovery included youth groups and upperclassmen mentors.  It also started the wheels turning in John's head.

In early 2012, Schenk officially opened Teens to Teens, a faith-based ministry.  The Mission Statement is simple:
"Teens to Teens provides a sense of hope and relief to struggling teens and young adults by forging friendships based in faith, guiding them to make healthy choices through mental health education, and peer mentoring programs." 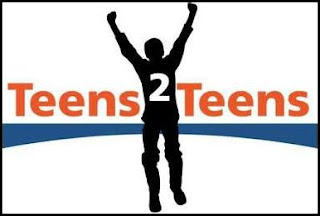 The concept of Teens to Teens is also simple.  It is about friendship and support.  Greg Robeson, who has been Schenk's youth minister in high school, summed it best for me, "Teens to Teens is about walking with (others) -- it's not about solving problems. It's not about having the right answers. Today is about creating allies."
Teens to Teens aims to teach peer mentors to be the bridge from the teen to the high school.  The peer mentors are not counselors.  Instead, they provide support, friendship and comfort to teens, while showing them that they have options in life, other than suicide or other destructive behavior.
That is a simple,. beautiful concept.  It is also a concept sadly missing, but desperately needed, in most places.  Most places don't have a John Schenk though.
I wish there was a John Schenk in my life during my teenage years.  I never attempted suicide, but I have to admit that I thought about it...a lot...for many years.  Perhaps if I had a John Schenk, I would have realized that I had other alternatives sooner.
John has met a lot of great athletes, like Hall of Famer Lou Brock (pictured below).  Brock started out with the Chicago Cubs, but became a superstar in St. Louis.  Schenk started in St. Louis and is well on his way to carving out a Hall of Fame career of his own.
I appreciate John sharing his story here.  Even more importantly, I appreciate John sharing himself with the teens in need.  This is an incredible young man and I am proud to call him a friend.
I have tried to give a brief view of Schenk's work and Teens to Teens.  I encourage everyone to go to Teens2Teens.org and the Teens to Teens Facebook page to learn more about this wonderful organization. 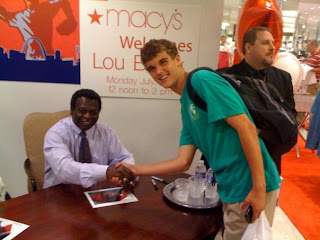