This is a regular series which attempts to combine my lifelong passion for bubblegum cards with my interest in celebrities.  Now that football is done, we shift our focus to hockey.

The first Celebrity Jersey Cards is a Blackhawks fan's dream.  What would the Blackhawks have been with Wayne Gretzky?  The Great One started with Indianapolis in the now-defunct World Hockey Association.  The Edmonton Oilers acquired him in a mid-season trade during his first season.  He went on to win four Stanley Cups with the Oilers, while the Hawks staggered in mediocrity.  He also picked up 8 straight MVP trophies, along with a ton of other trophies and awards.  He was inducted into the Hockey Hall of Fame without the regular 3 year post-retirement wait and his number 99 was retired league wide.  While Wayne never played in Chicago, his son Trevor Gretzky just might.  The (hopefully) next Great One is heading into his second season in the Cubs organization. 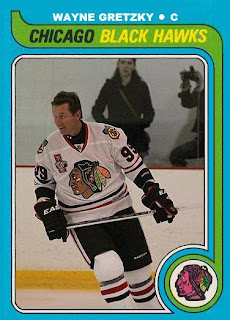 Lacking the hulking physical presence that so many of his contemporaries have, CM Punk does not look like an average pro wrestler, let alone one of the longest reigning champs.  Punk's recent 434 day reign as WWE champ was the 6th longest of all time.  That's pretty impressive for the Chicago born Punk.  Punk certainly paid his dues along the way, but he also picked up a huge fan following.  Often visible at Chicago sporting events, Punk was last seen here wearing a Cubs jersey.  For this Celebrity Jersey Card, Punk is sporting the Indian head sweater and wearing #13.  Although #13 has been worn by Alex Zhamnov and Daniel Carcillo, I am betting Punk has his own reasons.  He does things his way and his way works. 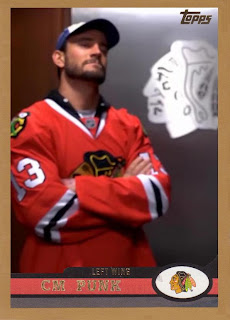