Roddy Piper Got Rowdy at Days of the Dead

As I have written many times before, I am a huge fan of Rowdy Roddy Piper.  I have interviewed him, worked with him on an educational ad series and met him many times over the years.  It is all still hard for me to believe.
Piper is a character for sure, but he is also a genuinely nice guy.  The pictures below demonstrate both of those qualities.
At the Days of the Dead con last year in Indianapolis (IN), I asked Roddy to put me in a hold.  He hemmed and hawed a bit (or so I thought) and then slapped on the sleeperhold.  He had lulled me in.
I was so surprised that I fell back a bit.  Roddy thought I was falling and released the hold to check on me.  I assured him I was alright, just surprised, but before I could finish that explanation, he slapped the sleeper on me again!
The line of people either laughed or were too shocked to respond.  Fortunately Cuzz caught both moments with the camera.  Actually, if you look in the mirror on the left, you can see Cuzz taking the pictures.
This is just another example of how cool Roddy is and also how much fun can be had at these conventions.  I am sure Roddy gets tired of posing in various ways.  He has the longest line and he tries to accommodate everyone, even us knuckleheads who ask for odd pictures.  Of course, Roddy gets in his own unique fun, too. 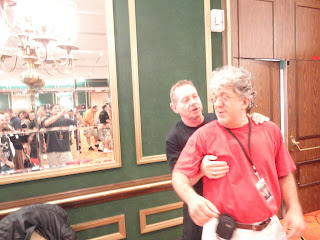 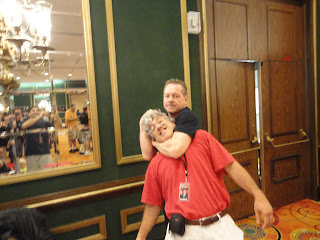