Clap For the Wolfman Mac

The Motor City Comic Con is in a few days and I cannot wait.  Each year is bigger and better than the previous.
Last year, we had the pleasure of interviewing Wolfman Mac, host of Wolfman Mac's Chiller Drive-In (formerly known as Nightmare SINema).  Wolfman Mac is very popular in the Detroit area, but his fandom also stretches across the country.
It seems every area has some sort of "character" hosting syndicated movies, shows or clips.  Some are just better than others and Wolfman Mac is one of the best.
Not only is he famous and popular, he is fan-friendly.  At the MCCC, he greeted fans and passd out signed photos.  He wasn't charging people for that effort either.  All you had to do was ask and you received.
I even asked for an interview and I received one.
Wolfman Mac is just one example of the fun people you will meet at the MCCC.  Major celebrities, minor celebrities, costumed fans and more are there and in a few weeks, I will be there, too. 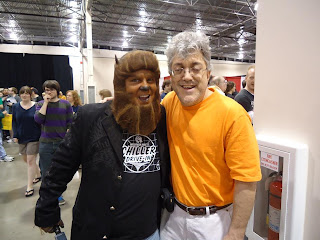