This is a regular series featuring friends who have met celebrities.

We have seen my nephew Matt Parker get choked by Chewbacca, Kane Hodder and several wrestlers, too.  Matt must rub people the wrong way, because his latest contribution to Friendly Encounters shows him getting punched by former Chicago Blackhawks star Jeremy Roenick.  Matt met JR, while he was signing copies of his book, J.R.: My Life as the Most Outspoken, Fearless, and Hard-Hitting Man in Hockey,
JR spent eight seasons with the Blackhawks and was very popular in Chicago.  After leaving the Hawks, JR played another twelve seasons with four other teams.  It even looked like he might return to the Hawks at one point, but unfortunately that did not happen.  I think things would have been different under the current regime.
Roenick retired with 513 goals scored, the second most among American-born players.  The Hockey Hall of Fame should be in his near future.
So just what did Matt do to earn the slug in the jaw?  Maybe Matt's imposing size caused JR to regress to his NHL days and protect his turf.  Maybe Matt asked for too much to be written in the inscription.
Well, I can't be too hard on Matt.  Aside from providing me with a great picture for Friendly Encounters, Matt provided me with Roenick's book as part of a Christmas gift.  I have to say, that is a great one-two combo.
Many thanks to Matt for a fun picture, an interesting book and a very thoughtful gift.  Thanks, also, to Erin for helping Matt and being patient with us both! 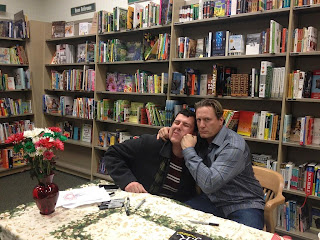 Matt Parker and Jeremy Roenick in IL-December 2012.
Posted by Johngy at 6:00 AM