Today, we celebrate the birthday of my friend Jason Fleigel.  This is a big birthday for Jason, as it is his last as a single man.
It is hard to believe I met Jason way back in 1996.  Jason Farber hired Jason Fleigel as a telemarketer at Lerner Newspapers, where we all toiled in anonymity.  While Jason did not blossom into a great telemarketer (I am not even sure he ever became an average telemarketer), he did become a valuable asset to Lerner for his IT skills.  More importantly, he became a friend to me and my circle of friends.
Jason has grown up quite a bit since then and our friendship has also grown.  We have been through good times and bad.  I am lucky to have him as a friend and I always know I can count on him.  Hopefully he knows the same about me.
As I mentioned, this is Jason's last single birthday.  I am sure he is celebrating it with Heather, whom he will marry in a few months.  I can honestly say that I have never seen him this happy (or this mellow).  I wish them a lifetime of happiness, but more on that in a future post).
The Little Ball of Hate, Senor Anger, JayHawk Evans...whatever you might call Jason, I hope you join me in wishing him a great birthday. 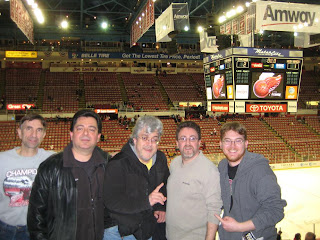 Cuzz Gekas, Jim Gekas, me, Jason Farber and Jason Fleigel in Detroit, MI-February 2012.
Posted by Johngy at 6:00 AM