Captain America (and No Aquaman)

I know what you are thinking.  Here comes another rant about Aquaman.  Everytime I post a picture of me with a superhero, it always ends up being a rant on the under-appreciated Aquaman.
It's a new year though.  I made some resolutions.  I will put the entertainment aspect of this blog ahead of my lifelong crusade to get Aquaman his due respect.
Towards that goal, I present Captain America from Wizard World.    Cap was kind enough to take a moment to pose with me (a noted Aquaman fan).  Obviously, Cap does not have the level of pettiness that I possess.
Cap was one of many superheros at Wizard World.  In fact, he was one of several Captain Americas at Wizard World.  Not that I was keeping count, but I saw only one Aquaman.
Captain America is a popular superhero.  He was created in 1940, as a frail boy who was turned into human perfection via a special serum, to help fight the war effort.  He was also the first Marvel superhero to be turned into another medium. Captain America was ranked sixth on IGN's Top 100 Comic Book Heroes in 2011 (Aquaman ranked #52, just as a point of reference).
I give credit to this Captain America.  He even bulked up for the occasion and carried the famous shield.  For this effort, he was well-received by fans at Wizard World.  He posed for many pictures with fans, celebrities and other superheros.  Oh, he also got featured right here on Johngy's Beat.  Anything less would seem un-American, even for an Aquaman fan! 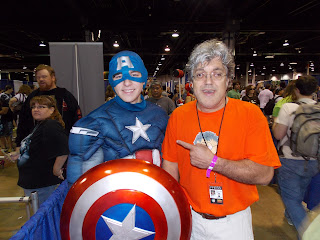