This is a regular series which attempts to combine my lifelong obsession with bubblegum cards with my semi-professional interest in celebrities.  I am in Detroit to see my beloved Blackhawks play their rival Detroit Red Wings.

As much as I would like to dump on the Red Wings, their success is undeniable.  Still, from a Chicagoan's point of view, they are not very likable.  In an effort to present as good of an image for the Red Wings as possible, I am featuring Anna Kournikova.  Granted, Anna is a bit young in this photo, but she grew up to be one of the greatest tennis players of all time.  Kournikova is wearing the #91 of fellow Russian Sergei Fedorov.  Hopefully the Red Wings will play more like Kournikova and less like Federov! 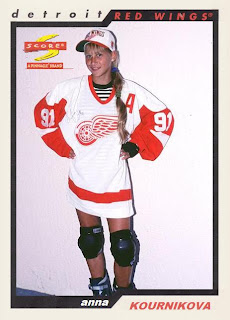 Despite leading the Chicago Bears to the Super Bowl 27 years ago, Jim McMahon remains a Chicago sports hero.  Nobody ever questioned his guts, courage or leadership.  I am hoping the Hawks continue playing like McMahon and finish the season as champs, just like McMahon and the Bears did.  I will give extra Johngy Points to anyone who can identify the female reporter in this Celebrity Jersey Card. 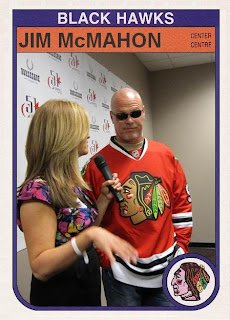 OK, I'll try. My first thought was Peggy Kusinski but I don't have a high level of confidence.

That is as good of a guess as any.