Jason Fleigel and I first met Matt Busch at the Motor City Comic Con.  In fact, Jason interviewed Busch for this site.
Busch is a well-known illustrator, who has done a ton of fantastic work for Star Wars-related projects.  Hence the Jason connection.  For a Star Wars fanatic, I would think interviewing Busch would be pretty darn cool.
Did Jason thank me for setting him up with this interview?  As a matter of fact, the next time the two met, I wasn't even invited.  Oh I suppose Jason will say that it was in Orlando at some Star Wars convention.  That is a weak excuse.  Johngy likes Orlando!  Besides, I have always invited Jason to Novi for the MCCC.
But noooooo.  I wasn't invited for fun, sun and Star Wars in Orlando.  I was left behind.  All alone.  Sitting in my yard wondering what fun was being had in Orlando.
A few days later, Jason sent me the photo.  Was he rubbing it in or was he just trying to land a spot in Friendly Encounters?  Jason is lucky I like Matt Busch, otherwise I would have deleted this photo and laughed as my revenge.
So there you have it.  This is my story and I am sticking to it.  If anyone happens to see Jason in the future at a convention, be sure to ask him where Johngy is! 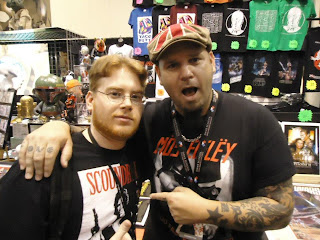 Jason Fleigel and Matt Busch in Orlando, FL-Summer 2012.
Posted by Johngy at 6:00 AM