This is a regular series which attempts to combine my lifelong passion for trading cards with my interest in celebrities.  Today I am featuring celebrities representing the best and worst team in the NHL right now.

Like him or dislike him (or really dislike him), Don King has made his mark on the sports and entertainment scene.  He is sporting a Florida Panthers jersey on his Celebrity Jersey Card, despite being a native of Ohio. I know Ohio is without a hockey team, but I am betting King's support of the Panthers has more to do with some promotional angle than any real interest in the team.  Still, it makes for an interesting old school card. 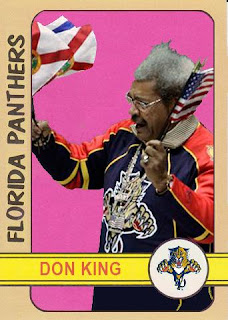 I first saw Richard DeanAnderson on tv's General Hospital.  On the show, Georgianne Lapieere (Cher's sister) played the wife of RDA's character.  That was before his days as MacGyver.  The native of Minnesota grew up wanting to play hockey, but two broken arms derailed that goal.  He turned to acting and the rest is history.  I know RDA is a huge hockey fan, but I am not sure of the Chicago connection.  Since it looks like a posed shot, I am guessing it is part of some ad campaign as well.  In any case, I won't pass on the chance to show Blackhawks love on another Celebrity Jersey Card! 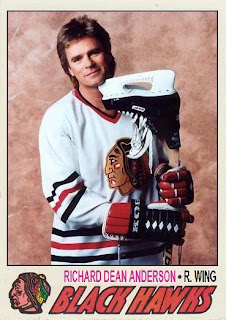