Contributor Extraordinaire Matt Parker is always looking to bring something new to the JohngysBeat.com universe (hence his title).  At GLCW's Blizzard Brawl, Matt raised the bar even higher.
At POWW's Wrestle Rage, we both met former (and now current) WWE superstar Billy Gunn.  We would meet Gunn again about a month later at GLCW's Blizzard Brawl.
We joked with him a bit at GLCW, because we did not need to get another picture with him (since we had the other recent one).  Still, Matt would find a way to get another picture (with a little help from Rob Myers, Chief Photographer.
We sat by the wrestlers' entrance to the ring.  As Gunn made his way, Matt spied Myers ready to take the picture.  The quick thinking Matt immediately photo-bombed it with his thumb of approval.
That picture cracks me up every time I see it.  I appreciate his effort in cases like this.  I also appreciate Myers for publishing this photo.  He is a true professional who is always up for some fun! 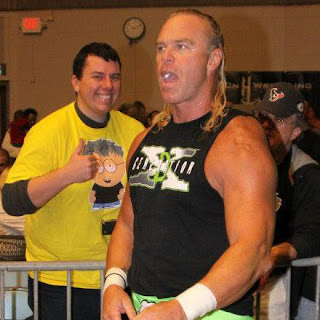 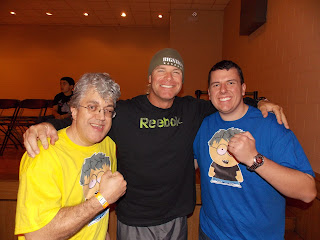