I first met Nikki St. John over a year ago at Resistance Pro Wrestling's first event.  Nikki was part of a three woman group that we interviewed.  That interview can be found at On the Beat with Melanie Cruise and Nikki St. John.  At the time, I had not seen Nikki wrestle.
I have learned a lot since then.  Nikki does indeed wrestle.  In fact, she wrestles a lot.  I have probably seen her wrestle 25 times in the last year or so and I know I have not seen every match of hers.  I also know I have seen her improve a lot since the first time I saw her.
I mean no disrespect there.  She was always solid in the ring, but she seems to be constantly improving.  It is very evident that she is working hard to hone her skills.  She is growing much stronger in terms of wrestling moveset and growing her character.  You know you will see an excellent performance every time Nikki is in the ring.  I look forward to seeing where she is in a year.
During that time, I will keep on enjoying her matches and talking to her at the various shows.  Not only is she a talented wrestler, she is very fan-friendly.  I would hate to destroy her bad girl persona, but the truth is she is a sweetheart.  Of course, now she will probably kick my butt for revealing that. 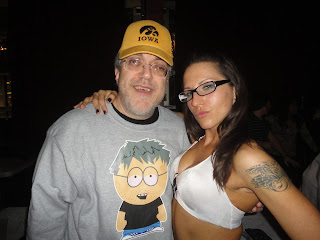