The Bears are 3-0 and traveling to Detroit to face the Lions who are 2-1.  A win by the Bears gives them a two game lead in the division.
During last week's victory over the Pittsburgh Steelers, the Bears lost defensive lineman Henry Melton for the season.  Coincidentally, they will be facing former Bears defensive tackle Israel Idonije today.  Idonije would look pretty good on the Bears defensive line right about now.
Aside from his playing ability, it was just cool to have Idonije in Chicago.  The Israel Idonije Foundation is committed to helping underserved communities with programs focused on life skills.  The foundation does great work and Idonije deserves to be lauded.
Idonije also created The Protectors, a comic book about super athletes with super powers.  I met Idonije at the 2013 C2E2, where he was promoting his comic.  It looks like a very interesting creation and I will be checking them out as they are published.
I hated seeing Idonije leave the Bears, but hopefully he did not leave Chicago entirely.  He is a good guy and I wish him a lot of luck...except today against the Bears.
I encourage everyone to check out IsraelIdonije.org to see the great things he and his foundation are doing.   You should also check out the Israel Idonije Foundation Facebook page and follow the Israel Idonije Foundation on twitter. 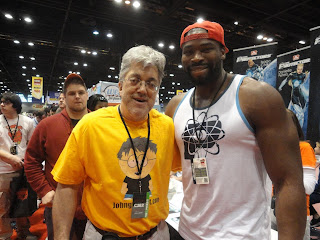