Tiger Stadium closed in 1999, with its' demolition complete in 2009.  While I like Comerica Park (the new home for the Detroit Tigers),  I always hate to see an historic place like Tiger Stadium close.
Tiger Stadium opened in 1912.  Ty Cobb, Hank Greenberg, Charley Gehringer and other great Tigers called it home.  Hall of Fame broadcaster Ernie Harwell called so many games there.  Sparky Anderson became the first manager to win a World Series in both leagues when he lead the Tigers to the title in 1984.
The history is spine-tingling and bone-chilling.  Almost 100 years of baseball were played at that field.
Then it was gone.  Poof.  All that was left was a semlance of the diamond and a marker indicating it was the former site of Tiger Stadium.
Cuzz Gekas, Matt Parker, Jason Fleigel and I visited the spot on a trip to the Motor City Comic Con in 2012.  We could not pass the chance to stand on this legendary ground, even if all visual aspects of it were gone.
I took my rightful place behind what would be home plate.  Forget Mount Rushmore, Monticello and Plymouth Rock.  This was history at its' finest.
As we left, a couple groups of people were arriving.  They were actually going to play a game of baseball on that diamond.  I resisted the urge to ask to play, too.
Unfortunately, even the remnants are now gone or at least fenced off.  I am very happy I had the chance to visit it when I did.  At least I can say I stood (or squatted) where some of the greats did! 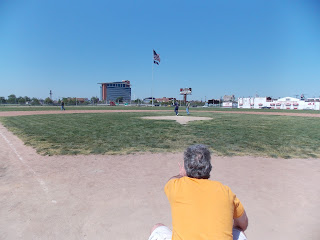 That may be true Matthew R,

Geez Johngy, you could have walked around the corner and used the men's room at McDonalds!!!!

That is really neat that you got to stand/squat on that special ground!!