On the Beat with JG Faherty

I want to start this piece by apologizing to author JG Faherty and thanking him for his patience.  I was supposed to contact him months ago about answering some questions and I got unexpectedly busy and let a few opportunities slip by me.  Fortunately, Faherty is very forgiving.  When I recently finally contacted him, he was still willing to indulge me.  Actually, as he pointed out, this is good timing for Halloween, since he is a horror author.
I really love finding new authors.  Faherty has written many short stories, along with several novels and novellas.  He is also involved with literacy and library programs (with some other interesting folks).  Those programs are near and dear to my heart.
Faherty answered a few questions for me.  I really hope to meet him in the future and talk to him in person.  I definitely hope he keeps in touch and we can get some updates on his future projects.  Until then, I encourage everyone to check out his website and other pages (the links appear at the end of this piece).

When did you know you wanted to be a writer?
***That's a good question. Really, it goes back to grade school. I enjoyed writing fantasy stories and comic strips that were R-rated take-offs on popular tv shows. Then I stopped in high school, tried to write a horror novel in college but tossed it because I thought it sucked, and didn't start writing fiction again until 1999, when, as a freelance writer, I got a job doing reading passages for grade school test prep books. I got hooked, and I've been writing ever since.***

How did you go from the normal business world to writing horror stories?
***Sort of explained above. I was writing test prep books for The Princeton Review, and part of that entailed writing the reading passages, half of which had to be fiction. It came easy, and not long after that I wrote my first novel. It didn't sell, of course, but that led me to my first sci-fi con, where I met Jeanne Cavelos, who said I could submit to her Van Helsing anthology. I didn't make the cut, but I came so close that Jeanne wrote me a note saying I should pursue writing because I had a knack for it. So I did. As for writing horror specifically, I've always been a huge fan, and it's mostly what I've read since middle school, so it was just natural that my muse would lead me down that path.***

It's cliche, but I have to ask..Favorite horror movie?  Favorite horror book (or author)?
***It's also a cliché, but I can't list just one. I can give you some of my favorites, and why, but I couldn't narrow it down to one anymore than I could name a favorite song or food. It all depends on mood.

Movies: Carpenter's The Fog, Phantasm, White Noise, Paranormal Activity, The Omen (the original), Godzilla (any), the Universal movies from the 40s...what I don't like is most of the new movies like Saw, Hostel, Human Centipede – all gross-out and no plot.

Tell us a bit about YA Literacy and Library programs and your partnering with the Curtis comic strip?
***There are actually 3 distinct programs: Library Outreach, Literacy, and YA. But they cross each other's paths so often that we frequently work together and share resources. It started with YA literacy. From doing presentations at libraries, I realized that all the librarians were telling me the same thing: we can't keep enough horror on the shelves for the teen readers. And so I did some investigation and found that most libraries don't know about – or can't procure books from – small and specialty press. So I started the program to bring more horror to the attention of the libraries. The idea is that if there is more horror on the shelves for the teens, they'll read more. And then they're more likely to be readers when they get older, plus remain fans of horror. Which, in turn, benefits writers of horror. I contacted Ray Billingsley, creator of Curtis, because he frequently mentions horror movies in the strip. It turns out he's got an enormous collection of horror dvds, and he's also an avid reader. He agreed it would be a good thing for Curtis to enjoy reading some books now and then, so he did several strips where Curtis reads horror novels. He even mentioned my own Carnival of Fear in one, and the Horror Writers Association in another. Ray is now a member of the HWA and did a Curtis poster for us to use at conventions. Since then, we've begun talks with other celebrities, such as Richard Christy and Amber Benson, to be part of our literacy movement.

From there, we expanded the program to include adult literacy. We've created a database for writers and librarians, so they can 'discover' each other and arrange for more presentations and readings to be put on, and we provide a special page on our website for librarians that includes recommended reading lists, which are updated each year.

The YA program overlaps the Literacy program by providing specialized resources, interviews, and other information for YA librarians and teachers. It will expand again in 2014, when 2 new sub-programs, involving horror curricula for libraries and schools, are launched.***

What is next for you?
***Well, I'm anticipating 2014 being a big year. In addition to the work I'm doing for the HWA (we just finished four amazing days at the NYC Comic Con, the first time we've had a booth there), I've got five novellas coming out from Samhain Publishing, a new novel, Hellrider, coming out from Evil Jester Press, and several short stories as well. All that means is now I've really got to get to work so I have some things to release in 2015!*** 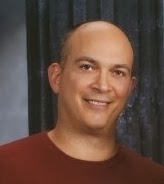 JG Faherty is the author of THE BURNING TIME, CEMETERY CLUB, CARNIVAL OF FEAR, THE COLD SPOT, HE WAITS, and the Bram Stoker Award®-nominated GHOSTS OF CORONADO BAY, along with more than 50 short stories. His next novel, HELLRIDER, comes out in 2014, as do several novellas. He writes adult and YA horror/sci-fi/fantasy. His works range from quiet, dark suspense to over-the-top comic gruesomeness. He enjoys urban exploring, photography, classic B-movies, good wine, and pumpkin beer. His personal motto is "Photobombing people since 1979!" You can follow him at www.twitter.com/jgfaherty, www.facebook.com/jgfaherty, http://about.me/jgfaherty, and www.jgfaherty.com.
Posted by Johngy at 6:00 AM