A while back, I featured my east coast bud Ira meeting WWE wrestler AJ Lee.  AJ is one of the few current female wrestlers I really wanted to meet.  While covering Wizard World last August, I finally got the opportunity to meet the WWE Diva's champ.
I really hate writing (or acknowledging) the Diva championship, but I cannot call it the "Women's" championship, because that would be confusing it with the former actual Women's title.  Make sense?
While that may be confusing, my point is simple.  It should just be a Women's title.  Period.  Maybe I am arguing semantics.
More on topic, AJ Lee is a solid female wrestler.  She works hard to improve her in-ring skills and she has a lot of personality out of the ring.  She is also not loaded with plastic (and I hope she stays that way).  AJ is different.  AJ is reminiscent of the women wrestlers of the past.
I have my doubts on the direction of women's wrestling in the big companies.  The mere fact that AJ is so unique speaks volumes.  I think AJ would be great no matter what, but in my women's "dream" division, AJ would have real competition, not just attractive women who can get through a match.
The line to meet AJ was incredibly long.  While I did not wait long, others waited for hours and they all left happy.  Apparently I am not alone in my appreciation of AJ.  For her part, AJ was very nice, although our interaction was brief, as hundreds of others were waiting for their turn.
I think AJ is the real deal and can have a long and successful career.  Talent like AJ's rises above. 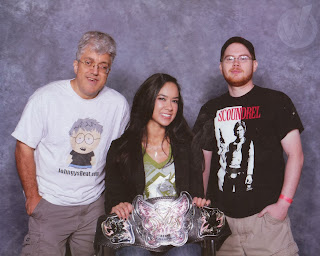