Funk, Wild and King.  That sounds like a lawyer firm.  Maybe it sounds like a wrestling stable.  Perhaps it could be a trio wrestling lawyers.
Mikey Wild is a talented young wrestler on the independent Chicago scene.  His rare combination of in-ring ability and personality in and out of the ring, makes him a highly entertaining performer.
I met Mikey early in 2013.  He quickly became a friend (and fan) of JohngysBeat.com.  At the time, he was in a tag team called Threat Level Black.  Their antics were hilarious, without ever taking away from their wrestling.  I would go to a show just for Threat Level Black.
Right now, Mikey appears to be on a semi-hiatus from wrestling.  I hope he returns to the ring and I hope Threat Level Black reunited at some point.  I think I will get my wish, because this is wrestling.  Everything comes in cycles.
Mikey met Bulls broadcasters Neil Funk and Stacey King a few years ago.  He seems to be a big fan, as he gave them two thumbs up.  I am sure Funk and King would give Mikey two thumbs up (or would that be four) if they really got to know him.  I know I give him two thumbs up (and I would give him more if I had more thumbs).
Here's to you Mikey.  Thanks for sharing the photo (even if I did sort of just take it). 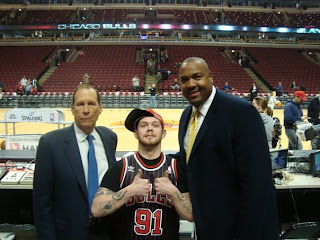