Buff is the Stuff and Nothing Rhymes with Johngy

Buff Bagwell is one of those guys who seemingly should have had a better wrestling career.  It's not that he had a bad career, but with his look, ability and charisma, I think he should have done more.
Buff held many titles and PWI ranked him #66 of the 500 best singles wrestlers in the PWI 500 in 1999.  He as wrestled for over twenty years.  Still, I think he should have gained more fame.
I often wonder what happens.  I suppose, it is just like everything else.  I guess part luck, part politics, part intangibles and part ability all contribute to how much success someone achieves.
This isn't meant to dump on Buff.  Thousands of others would have liked to have Buff's career.  I am sure Buff is probably satisfied with his career.  Yet, still I ponder why some reach superstar status and others just never reach that tier, despite all appearing to be in place.
In any case, I was happy to meet Buff when he performed in Chicago a few months ago.  I even got to wear the legendary hat.  How cool is that.
Buff might not have become a wrestling legend, but Buff is still the stuff (and he will gladly tell you so).  In the end, I guess that is good enough. 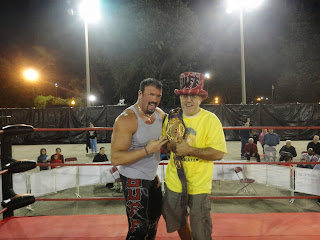 "Buff Bagwell is one of those guys who seemingly should have had a better wrestling career."

People often say the same thing about me...... EZ