This was the first year in about a decade that I did not attend an Astros game in Houston.  My sister's family no longer lives there and we all had too many things scheduled this summer to squeeze in a Houston baseball trip.  I am grateful for the many games I saw in MInuteMaid Park, but I also am missing it terribly now.
Granted, 2013 is an odd year for the Astros.  They have a relatively new owner.  They have moved into the American League.  They have the worst record in baseball.
All of that aside, I miss MinuteMaid Park and Houston.  The organization has always been great to me, when I asked for press credentials.  We have interviewed or met (at least) several baseball greats, like Jeff Bagwell and Craig Biggio and many more favorites like Jimmy Wynn, Jose Cruz, Jamie Quirk and Brad Ausmus.
MinuteMaid Park itself is beautiful.  The concourses were roomy.  The various levels and lounges were unique.  The food was awesome.
Houston just might be my favorite baseball park.
As for my favorite baseball pork, I think the picture below says it all. 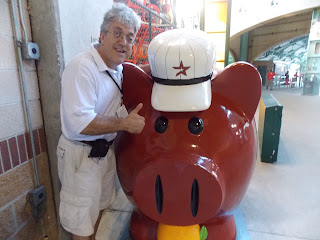 Me with the pig statue in MinuteMaid Park in Houston, TX-Summer 2012.
Posted by Johngy at 6:00 AM

Minute Maid Park is definitely a great baseball park! Maybe 2014 you guys will go back and visit!


That is the best lookin' date that you've had in years!!!!