In and Out of Character

One of the funniest moments during all of my interviews occurred while I was interviewing actor James Duval at Motor City Comic Con 2012.  It was completely an inside joke though, humorous (and notable) only to my JohngysBeat.com crew consisting of Jason Fleigel and Matt Parker.
During our interview, Duval talked about his musical career.  He mentioned having characters.  Characters?  I am all about characters!  Actually, I should say, we are all about characters.
Jason has Old Man Haggerty.  Matt has several including Donald and Ronald, Kal, KJ and more.  I have Kazmir the Clown, Wilson, Atticus and countless others.
Who are these characters?  They are obviously imaginary folks we developed with some odd quirks who interact with each other or real people as forms of entertainment.
Okay, it sounds a bit schizophrenic, I admit.  Still, it amuses me when out of nowhere you might hear Jason (as OMH) yell, "Eh?"  You might hear Donald and Ronald arguing (courtesy of Matt's fruitful mind).
Some of the people around us don't understand the characters or the humor we derive from them.  Nevertheless, we stay true to ourselves and our characters.
If James Duval can have a character and discuss it openly, why can't we?
Or as Scott's (Matt's father) occasional character would ask, "What about me?  I want a character, too." 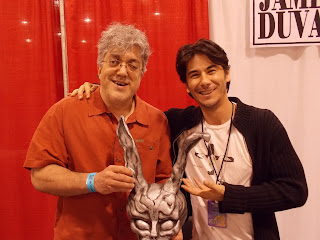