She is mysterious, devious, beautiful and talented.  Miss Prig is perfect for pro wrestling and she is a member of the Resistance Pro roster.
Miss Prig first appeared at R Pro as Colonel Jesse Corgan's therapist.  Nothing was known about her then and very little is known about her now.  Still, she is a vital part of Colonel Corgan's Special Forces stable.
Thanks to my investigative reporting skills, I learned she is a huge music fan.  The Smashing Pumpkins are one of her favorites, although she states that she has a lot of favorites and loves all types of music.
Unfortunately, that is about all I have discovered.  Oh, I could mention the obvious.  She has gotten involved in some matches.  She riles and beguiles fans.  I am looking forward to where her character goes now that the Almighty Sheik has joined Special Forces.  I think Miss Prig will start to become more of a force (no pun intended) at R Pro.
Fortunately, Miss Prig is fan-friendly after the wrestling events.  Maybe she is just recruiting more foot soldiers for the Special Forces.
You can follow Miss Prig on twitter, where you can learn more about her.  Better yet, come to an R Pro show and see her in person. 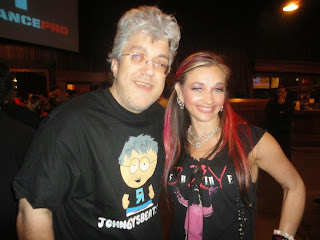