Who better to model a JohngysBeat.com shirt than the Male Model Ashton Vuitton?  Actually, Ashton is a professional wrestler, who is called the Male Model.  Still, like I asked, who better.  Wrestler, model or both, Ashton looks great sporting the Johngy shirt.  You can't buy this type of promotion.
Normally, Ashton would not be covering up his Adonis-like physique.  With ESV as his personal trainer, Ashton is totally chiseled.  Why should he cover it up with a tshirt (even if it is a JohngysBeat.com shirt)?
Ashton is part of the tag team Body Magic (with Eric St. Vaughn).  Body Magic has made their presence known in Resistance Pro Wrestling.  I look for Body Magic to be a big part of the tag team title scene in 2014.
Ashton is just part of the talented roster of Resistance Pro.  To learn more about R Pro, head over to ResistancePro.com. 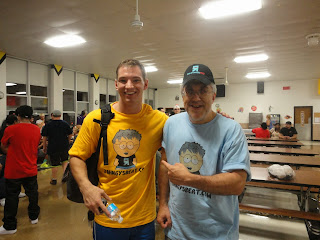 Ashton Vuitton and me in Chicago, IL-September 2013.
Posted by Johngy at 6:00 AM