I met Heather Furr a couple years ago, when I started covering the Chicago Bliss.  I knew very little about Heather, but I have learned a lot about her since then.
I have seen Heather in practice, on game days, at team functions and even at her regular workplace away from football.  She is a two-time Legends Football League MVP, as a two-way player (safety and quarterback).  She is a tough, charismatic leader.
As much as I thought I knew about her make up, I learned a lot more by watching her on Stone Cold Steve Austin's Broken Skull Challenge.  I will not reveal the outcome of her participation on the show, but I will say I was very impressed with her toughness.  I have seen her tackled on hard artificial turf and slammed into the side boards.  I already knew she was tough, but this was a completely new and different level of toughness.
Athletes can perform well in specific sports.  They can show certain skills.  Heather was not in her comfort zone of a football field here, though.  She was in a very physical battle with seven other tough women.  The various challenges were not exactly parts of her regular training routine.  She showed her physical abilities and her strategic mind.  She had a plan of attack and she backed it up with determination.  My hat is off to Heather for her performance.
In the promo photo, Heather is seen standing next to wrestling legend Austin.  My mind starts to wander as to what Heather could do in a squared circle.  I am certain a title belt would be around her waist at some point.
It has been a lot of fun covering Heather and the Bliss and I plan on continuing that into 2015.  I hope Heather is back for the three-peat! 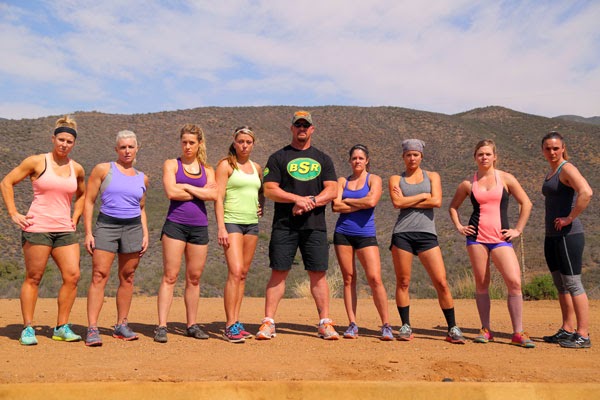 Heather Furr (fourth from left) and Steve Austin in Los Angeles, CA-Summer 2014.
Posted by Johngy at 6:00 AM