Jacques Baron would have fit nicely with the bWo (Blue World Order) in ECW.  Pictured with the Blue Meanie, Nova and Stevie Richards, Jacques looks great in the blue.
Actually Jacques is friends with the members of the bWo.  They shared a booth at a Wizard World convention a few years back.  This is the same convention when I first became aware of Jacques and Resistance Pro Wrestling.
I see these four and I see four great guys.  I also swee four funny men who give great interviews.  I interviewed te bWo guys individually and all were a blast.  Jacques is also always up for some fun during interviews (and more fun off camera).
Nova (aka Mike Bucci) has an incredible wrestling mind.  He is mostly out of wrestling, choosing to concentrate on his regular job.  He could jump back into wrestling at any time.  I am sure the offers are out there.  He is also one of the most genuine men I have met.  I have heard nothing but praise about Bucci.
Blue Meanie (aka Brian Heffrom) is a good dude.  When I went as Blue Johngy for Halloween, we exchanged tweets.  The guy is funny and talented.  Don't let his weight fool you.  He could go in the ring.  Good for him now that he has lost a bunch of that weight.
Richards is probably the most active wrestling-wise of the three.  Little Stevie is still in incredible shape.  My favorite memory of Richards is from the Blue Meanie interview.  The camera panned around and caught Richards enjoying his salad.  He stopped mid-bite and remained frozen until the camera was off of him.  It was pure lunacy.
Then there is Jacques.  I love the guy.  He (and his brother Gabe) have welcomed me into the RPro family (and their families).  He always has a kind word and a sharp wit.
This Friendly Encounter isn't so much about them meeting.  They have met many times.  This is about four great guys who gave me fun memories together and individually, in and out of the ring. 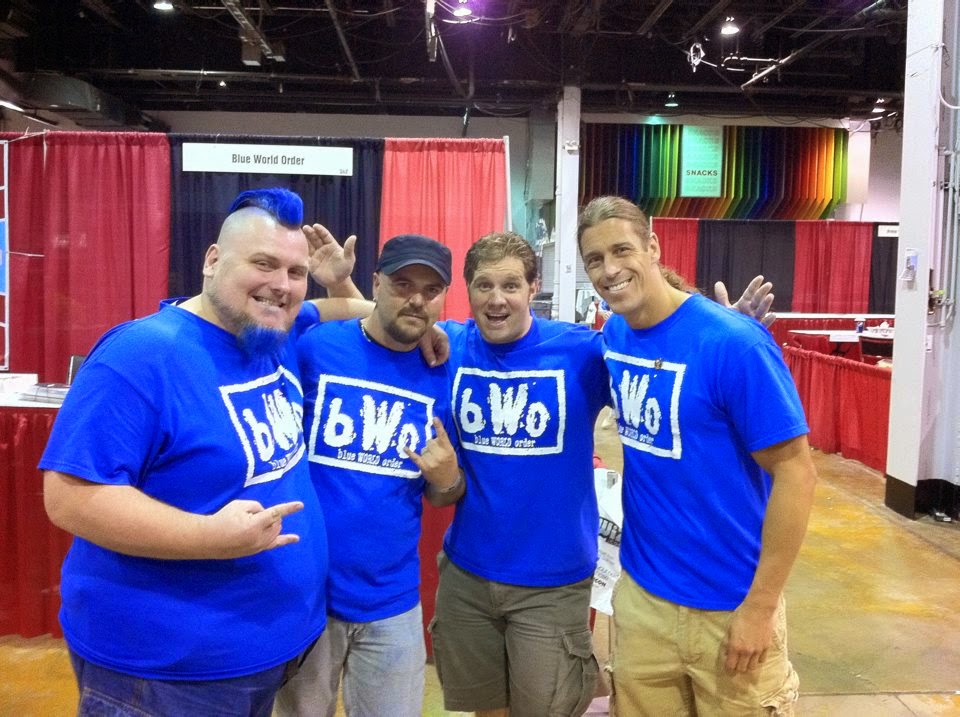 The Blue Meanie, Jacques Baron, Mike Bucci and Stevie Richards in Rosemont, IL-August 2011.
Posted by Johngy at 6:00 AM