Athletes get trading cards.  Why not celebrities?  At least celebrities wearing athletic jerseys should get cards.  I am doing my best to create cards for jersey-clad celebs.  As summer approaches, we concentrate on baseball with two coaches from other sports..

When his coaching career ends, Nashville born Bill Belichick will be heading to Canton, OH, for enshrinement in the Hall of Fame.  He repped the St. Louis Cardinals jersey with #10 for his pal Tony LaRussa.  I'll take off points for hiding the jersey under a coat, but I will still give him a Celebrity Jersey Card.  I still am not a fan, but right is right. 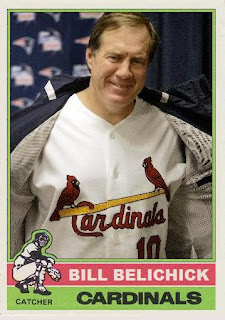 Raised in North Carolina, Ty Willingham went on to have a lengthy and successful coaching career.  His most notable stint was leading the Notre Dame Fighting Irish for three seasons.  His Celebrity Jersey Card picture probably dates back to his tenure as coach of the University of Washington from 2005-2008.  Although he was an excellent leader, let's hope nobody follows his example of tucking in a baseball jersey.  This is a major infraction. 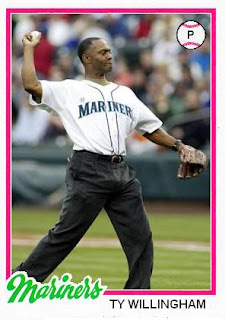