California native Tim Robbins has had a lengthy career as an actor, director, producer, musician, activist and more.  He is also a bit of an athlete.  We have already seen him pictured with the New York Rangers on a Celebrity Jersey Card.  Today, he is looking a bit like Tim Foli, which is why I put him at shortstop.  His #4 was most notably worn by Ron Swoboda or Lenny Dykstra, but I think Robbins would be more like Bob Bailor. 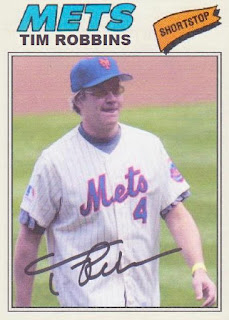 Actress Sigourney Weaver stayed true to her New York roots by sporting a New York Mets jersey for her Celebrity Jersey Card.  I give Weaver extra points for holding a bat and wearing a Mets cap.  Actually,. she gets extra points for choking up (although not as much as the legendary Felix Millan).  Wow...I just noticed a batting glove, too!  This rocks! 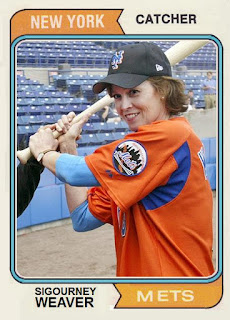