I have been a fan of Sugar Dunkerton since he made his debut at Resistance Pro.  I have briefly recapped his RPro career in my latest contribution to Tru School Sports at On the Resistance Pro Beat with Heavyweight Champ Sugar Dunkerton.
As any wrestling fan knows, wrestlers are somewhat limited by the booker.  Still, within the confines of that, wrestlers have the ability to rise above and shine.  Give several wrestlers the same exact match and you will see varying results.  The intangibles and personal touches are what separates the great wrestlers from the pack.
Suge D has the intangibles and he certainly has the personality.  Back in his early days as part of the tag team of Lock Up, Suge had to stay within the boundaries of that role.
Consider that he was part of a tag team.  Consider that Lock Up consisted of two prisoners under the thumb of Warden Myers.  Consider that the team was a heel team.
Those factors limit the amount of fan interaction and personality one can show.  Suge did his best to stay within the parameters and still shine.  Bad guy or not, he was gaining popularity.
When his run with Lock Up ended, he embarked on a singles career and quickly found himself in the title picture.  His rise was aided by a turnover at RPro, but it was inevitable.  The departures only sped up his growth.
To his credit, Suge D also grew into and a bigger role.  I saw a change in him.  He became a leader in and out of the locker room.  As RPro Heavyweight champ, he had certain responsibilities to represent the company and he took on that challenge with ease and energy from the start.
The fans are solidly on the Special Dark bandwagon.  Even when he faced hometown favorite Colt Cabana, the fans were behind both wrestlers.  They were just happy seeing a great match.
Suge D is a special wrestler.  It is a pleasure watching him entertaining fans every show.  I always look forward to his matches.
The next opportunity to see Suge D in action will be at "Death Proof" in Willowbrook at the Baron on next Saturday, August 1.  Head over to ResistancePro.com for more info and ticket details. 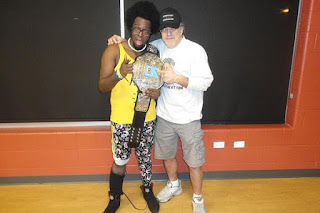