I met Jim Strong years ago.  We were on parallel paths, although he was more of a professional photog and I was more of a writer-wannabe.  Our paths crossed many times over the years.
One time Jim really saved me by photographing me with WWE Hall of Famer Tammy "Sunny" Sytch.  My camera zonked out on me and I would have been screwed.  Jim took the picture and sent it to me later.  Back then, Tammy wasn't doing many appearances and to miss the chance to get a picture would have been a lost chance.
Because of Resistance Pro, Jim and I have reconnected a bit.  More precisely, Jim has been a big help on some Johngy's Beat coverage there.
Jim probably could have his own site based on the number of celebs he has met.  I still don't know how he meets all of the musicians, one of whom is Jeni Imparato of Phosphene.  Jeni is just one of many musicians (hmm and so many of them are attractive women, too) Jim has met.
My real question is since we are working together at times for Johngy's Beat, when is Jim going to bring some of those talented, lovely musicians onto the Beat.  I really could use some musical coverage here. 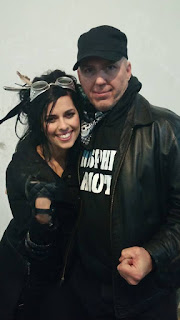