Sting (Steve Borden) was probably the biggest star who had the chance and never wrestled in the WWE.  Stated reasons were his Christian beliefs, his disdain for the product, his lack of a need of cash, his desire to have a light workload and other factors.  Whatever the real reason, everything was changed when he joined the WWE last year.
Sting has had an interesting career.  He spent most of his 25+ years as a good guy.  His rivalry with Ric Flair is one of the greatest and they were the faces of WCW for years.  Incredibly, Sting gained even more popularity during a lengthy span when he barely wrestled or spoke.  As the main force opposing the invading NWO, Sting reached another level of stardom.
Sting was also one of the few big name wrestlers I have not met.  That all changed this year at Wizard World.  Johngy's Beat Correspondent Scott "The Wonder Boy" Steiner and I met the Icon briefly.  While it was just a short photo op, Sting did the best he could to make it a special moment for the fans and press.
As a side note for my fellow convention attendees, get your photo op tickets asap.  The tickets have ben selling out and unfortunately many times they are sold to ticket resellers in hopes of profits.  This isn't the fault of Wizard World.  It's just people trying to profit from the system.  The lesson is not to delay and get your tickets right away or be prepared to pay a lot more. 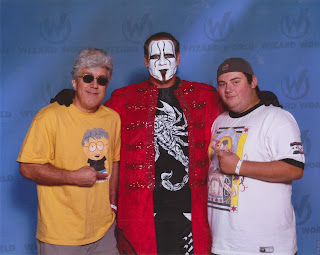